It’s official, Steam Early Access is the new Kickstarter for medium budget games. In late 2013 we predicted that the biggest story of the coming year would in fact be Steam Early Access. Since the beginning of the year we’ve heard nothing but success stories due to launching on Early Access. Rust, DayZ, Starbound, and now Next Car Game owe their initial sales success to Steam.

A quick look at Steam reveals a total of 93 games currently available on Early Access. A number of these games are highly anticipated, and almost all of them are selling for full price. Sure there are a select few running sales like Epigenesis which recently ran a free weekend, or Paranautical Activity which was included in a weekly Humble Bundle. For the most part these 93 developers are successfully funding further development through crowd sourced investing that directly equates to sales and doesn’t require them to spend time or money fulfilling Kickstarter rewards.

Talk to almost anyone with a Â successful Kickstarter campaign and they will confirm that the worst part about Kickstarter is how much it costs in time and resources to handle reward tiers. There’s really no great solution to the problem either. Kickstarter backers are becoming increasingly demanding about what rewards they get. Take Pantheon: Rise of the Fallen’s Kickstarter as an example, Â they actually had to revamp the rewards and even make a graphic outlining more clearly what exactly you get for backing the game. Going by the number of backers thus far they’d need around 6000 backers to successfully fund the game, at which point somebody has to sit down and figure out what 6000 individual people get. Asking strangers for $10,000+ dollars isn’t easy, especially for theoretical video games. Pantheon: Rise of the Fallen has gone as far as to promise them lots of stuff including paid flights from anywhere in the US, Brad McQuaid taking time to sit for a phone chat, and dedicating time for multiple staff members to create unique in-game content for especially generous backers. 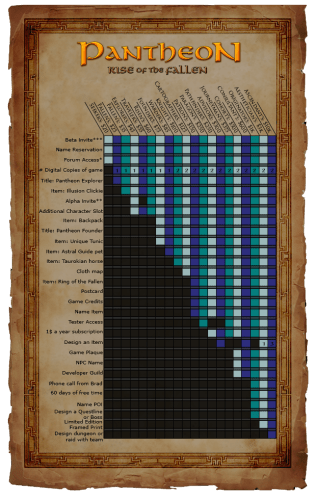 When it comes right down to it Kickstarter for games is just plain crazy. Sure maybe there are a few notable success stories, but for the most part Kickstarter just makes a lot more sense when dealing with physical products and limited reward tiers. When you’ve got to fly somebody around with the money they paid you, and invest possibly hundreds of man hours of development time to fulfill the rewards for just a single investor you’ve got a serious logistics problem that isn’t going to be fun solving.

Steam Early Access on the other hand throws all of those headaches away. The only downfall is that you need to have a (somewhat) playable game to release to the public. If you can get your game to Alpha stage you’re ready to sell on Steam and call it Early Access. People who buy your game on Early Access have a vested interest in the continued development of the game and will generally monitor your dev blogs, watch for and try out new updates, and tend to just be more engaged community members for your game. Let’s not forget the best part, you don’t have to offer steep discounts on Steam. Â Players have to pay full price for the opportunity to try the game. Forget reward tiers, forget flying people around the country and mailing thousands of trinkets. Players are begging you to just take their money right now and let them Alpha test your game.

Steam Early Access is not without risks though. As Ashe’s Cricket 2013Â showed us late last year, some games are just not ready for the critical eyes of Steam users. While many of the Early Access games are somewhat polished and playable, others are simply not. It’s entirely possible to kill a game’s chances at success by releasing too crude of a playable Alpha. Even if the final version of a game is fantastic a developer runs the risk of scaring off the buying public due to poor initial impressions. The other threat developers face is losing their players interest too early. Introversion’s Prison Architect has been a smash success on Steam Early access. It’s arguable their continued popularity post Early Access launch is due in large part to their dependable update schedule which sees a new content updates every month or so. Developers that release too little content could see their player base lose interest and simply not return to see what the finished product is like months down the road.

It’s important to think of the long term future for Steam’s programs such as Greenlight and Early Access. Much like Greenlight is turning out, can there simply be too many Early Access games? Will Sony or Microsoft take note of Early Access and release a similar feature for consoles? How soon until AAA developers get on board and start flooding the market with alpha builds of big budget titles? These are important questions to consider that don’t have immediate answers.

Valve has consistently been a force for change in the gaming industry, and Early Access may be the next big thing.Â It’s possible we are in the beginning of a revolution in the way games are released to the public. Only time will tell for sure, but either way it’s going to be one hell of a ride.

How Sony could win the console war using a PC developer